Mea Shearim is the new Harlem

A few days ago, I went running with a friend in Gan Sacher, a public park in the heart of Jerusalem. Gan Sacher is a great place to run--well maintained, ample running paths, big enough that you can actually get a decent run in and largely (blessedly) flat. Is it the new Central Park? No. But, it does the job.

So, there we were, running along...and all of a sudden we passed a large cluster of Haredi (ultra-orthodox) men. And then another. And another. Apparently, some yeshiva or another picked this day and place for its annual Yom Kef (Fun Day). And we run and run and keep on passing more Haredim, and all I could think was: thank G-d I am not running alone. Thank G-d I am with a man. Someone to protect me.

How do I decide where I can and cannot go? Rule of thumb: if I feel that I would have to change my clothes first, put on something more concealing (like, say, a burka) I do not go. Suffice it to say that there are large swaths of Jerusalem that are now off limits. However sometimes, by accident or unavoidable circumstance, I find myself in one of the Haredi enclaves. There was the time I had to pick up something in Ramot and started to panic when I realized it was 1) a Haredi neighborhood and 2) I was not wearing Haredi attire. And there was the time last summer when I got lost while driving a friend to the Central Bus Station and found myself driving through Meah Shearim. At night. In a short-sleeved shirt. I am not exaggerating when I say that I was nearly in hysterics by the time we finally got the hell out of there.

Am I the only one who feels this way? And if not, do others feel it to the same extent? Do others feel, as I feel, uncomfortable if they find themselves in an elevator with a Haredi man? Not any man, mind you. Not stam a religious man, a orthodox Jew. Rather, a Haredi man. Do others get nervous, as I do, driving in or near Haredi neighborhoods?

Do others brace themselves, waiting for a rock to come through the window?

I am not just afraid. I am also angry. Do others feel the anger I feel when approached by Haredi panhandlers? Oh—you will attack women on the buses when it suits you, at the Kotel when it suits you and on the street when it suits you. You will tell us how we must dress and how we must act and what we can and cannot do. You will deface pictures of women—any pictures, of any women. You would erase us. You would throw us to the back of the bus, to the other side of the street, to the other days of the week. But our money, a woman’s money? Well, that you like just fine. Yeah, well, fuck you. Go beg money off a man.

I am angry because the government is doing nothing to deal with the increased violence. Now, instead of just being afraid of Arabs, I have to be afraid of both Arabs and Jews, and more afraid of the latter than the former. The government takes violence perpetrated by Arabs seriously. Arabs are subject to punishment and reprisals for any violent actions. Violence by Jews, on the other hand, is no big deal and the Haredim are not held accountable. If the Arab residents of East Jerusalem were to riot as the Haredim do, to burn trash cans as the Haredim do, to attack women on buses as the Haredim do, to throw rocks as the Haredim do...everyone would be out screaming "Intifada!" and “Terrorist!” and the police and/or the army would be out there in force, and quite possibly with live ammunition. * But let it be a Haredi Jew doing the attacking, the screaming, the burning and the stone-throwing and the matter will end with concessions…to the Haredim. “Please please please…do not riot anymore. We will give you whatever you want.”

I can guess what the automatic response will be: nu, spend a Shabbat in a Haredi neighborhood and you will see how nice the Haredim are. And to that, I have only one response: no. I have no doubt that Haredim can be nice when one is in their world, dressed in a way they approve of and acting in a way that they approve of. The question is whether the Haredim can be nice in my world. Can they function in the workforce, on the street and on a bus? Can they handle interactions with women? A female superior at work or a female instructor at school? (And if so, why do they need Frauen-rein divisions in the Army? Why the emphasis on setting up companies where men and women are segregated completely? Why the separate seating on the buses? ) Can they accept the rule of law, even when said law is being enforced against one of their own? Can they respect that other people do things—including Judaism—differently than they do?

Do I have to be afraid if I run past a group of Haredi men in the park?

Because until the answer to all of the above is “yes”, how nice you are to G-d on Shabbat, well, it really does not matter.

* Of course, this all begs the question—if rubber and/or live ammunition is the proper way to deal with a riot, why not use it on Jews as well? And if not, why are we applying it to a group that has, unlike the Haredim who have a say in government, very limited means of public expression? This double standard thing—it is getting old.
Posted by Gila at 2:03 PM 33 comments:

Labels: Do you think about the things you do think about?, Life in Israel

I meant to only start posting after the holiday, but a matter of urgency just came up and I must share.

Today, I had to buy wine.

Buying wine is a task I avoid whenever possible. I hate wine. To my oh-so-distinguishing palete, all wines taste approximately the same: bad. As such, having me choose the wine for a meal is to beg and plead for disaster. When I am hosting a meal, I avoid said disaster by farming out the wine buying duties to one of my guests—preferably one who likes wine. I instruct the appointed wine bearer that they should buy whatever they like that goes with chicken. When I am invited out, I will offer to bring something else: challot, a side dish, appetizer salads, world peace—anything but wine. If the host insists, I will bring a wine bottle from the stash I keep of “wine brought by my guests that we never got to”. If someone else brought it, there is a fighting chance that it is actually a good wine.

But sometimes, sadly, it cannot be avoided. Sometimes my wine stash is empty. Or there are days like today, where my wine stash is not empty, but all of it is plain kosher, and not kosher l’Pesach kosher. To tell the truth, I am not 100% sure if wine has to be kosher l’Pesach or not. However, given that the local super has been offering piles and piles of kosher l’Pesach sponges, aluminum foil, plastic wrap and cleaning fluid—all of which are liable to be fatal if ingested—there is no way that wine, which is merely unpleasant when ingested, has managed to get off scot free.

Out of necessity, over the years I have developed a set of simple rules which can help to steer me in the right direction when purchasing wine.

1) No wine with screw tops. Screw tops are bad.
2) Do not get the cheapest wine. That means it is bad. But do not get the most expensive wine either (because, quite frankly, I like you, but not that much). Pick a wine in the mid-range—say about 25-30 shekels. If it is mid-range, it is probably good.
3) Muscats are for dessert! They do not go with chicken!
4) White wine goes with white food and red wine goes with red food. Or it is the other way around.
5) King David Sweet Concord Wine (local version of Manishevetz) is unspeakably vile and should never, ever be purchased. But it has a screw top, so you already knew this!
6) The prettier the bottle, the better the wine.

The last rule is the most important. Once one manages to winnow out the screw tops and muscats and the super cheap wines, one is left with a wide selection of bottles from which to pick. At this point, one picks based on the bottle. Generally, this is easy. Today it was not. All the bottles…I don’t know…they were so…blah! Plain! Here a few flowers, there some nice scenery…but nothing special. Nothing that made me say “wow, that wine must be really tasty to those who do not think that wine tastes like battery acid”. Then, suddenly, I saw it: the most beautiful bottles EVER. Look for yourself. Gorgeous, no? 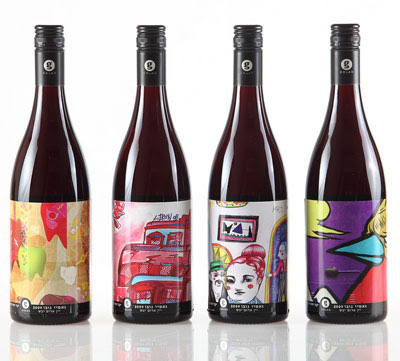 And the price was perfect-29 shekels! Score! But wait…what is this?

On a wine bottle with a pretty label?!

WTF?????? Those bastards! To make a gorgeous label and then add a screw top so I cannot buy it.

I spent a good twenty minutes staring at the wine section and trying to decided what on earth to buy. In the end, out of desperation and a burning desire to go home, like, today, I said screw it, grabbed a couple bottles of Teva, and headed for the check out. 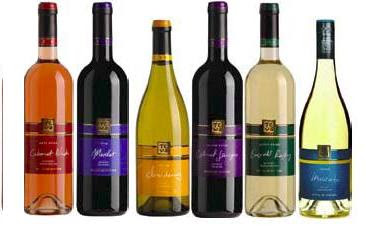 Not so exciting, but the colors are nice, no? I bought a green label (white wine-goes with chicken) and a red label (blush wine—goes with the mutant spawn that one gets from cross-breeding chickens and cows).
Posted by Gila at 1:00 PM 11 comments: