“Think of it as an investment”.

As a "what would ideally be a brief but will instead be a long-winded" digression, Israelis frequently ask that question and Anglos never do. This is not necessarily a point in favor of the one and against the other. Perhaps Anglos give more to charity than Israelis and have found creative ways to get people to give even more. Or perhaps Israelis are equally charitable, they just do not require incentives in order to give. Now, of course, as an Anglo, I secretly lean towards the former while giving public lip service to the latter. The lip service is necessary so that I do not come across as one of those horrid, judgmental Anglos who loves Israel but hates Israelis. (Did I not sound admirably reasonable and fair in the first section of this paragraph?) In general, one does not want to come across as judgmental because, unless one is judging: the Right, the Left, the Hilonim (seculars), the Haredim, Tel Avivim, Settlers, the people in favor of the demonstrations or the people against the demonstrations, judging is simply not okay. And it is particularly not okay on Tisha B’Av, and especially when it is Tisha B’Av and one is not fasting and/or doing anything else in honor of the day and so, in other words, one is at a point where topping it off with some bad-mouthing of my fellow Jews could well be the thing that just pushes G-d off that proverbial edge, so far as my fate is concerned. Which would be bad. In particular when I am trying to get back into the dating thing and thereby providing G-d with any number of excellent and entertaining opportunities to smite me with, I don’t know, another aging Sonny Bono gone to seed look-alike, like He did last year.

And now we are done digressing….

Anyway, one learns over time what works; which investments are profitable. Book swaps, for instance, if scheduled well, can do very well. The trick is to not go overboard on the refreshments and while you need to have a good supply of trading books, by no means should you allow your guests to go overboard on the book dumping. (Last year I was left with about six sacks and cases of old books to dispose of post-swap. This year, I am imposing a book cap). Clothing swaps on the other hand are nice on paper—everyone says “oh that sounds like fun” but in the end very few people show and it is not profitable.

That goes well if you have a Yanay. Yanay is my co-worker. When I told him that my intent was to put out the cookies in the kitchen together with a piggy bank in the shape of a parti-colored cow and a note (Five NIS for Two Cookies! All Proceeds Go To Alyn!) he told me I was dead wrong, a horrible salesperson, and that was not the way to sell cookies. Instead, he grabbed the cow, had me fill some plates up with cookies and he proceeded to march from office to office with me in tow. I would start off with this wimpy spiel about how Alyn is a great cause (it is) and the cookies are really good (and they are; I do make some fine cookies) and please support this cause and blah blah blah and then Yanay would jump in and tell the person that no discussion was necessary, it's for charity, cough up the cash, he or she was going to buy cookies. Or else Yanay would brain them with the cow. Now, the cow would have only survived one braining (it only cost 25 sheks and I suspect that the ceramics may not be of the highest quality), so if Yanay had to make good on his threat, say, early on, when we were in R&D, we would have had nothing with which to intimidate QA, HR and the other departments. Fortunately, the fear factor was enough. In fact, we managed to achieve nearly 100% participation, including from those who 1) do not eat cookies and 2) are Haredi so they do not eat my cookies. In the end, I tripled my charity investment. Suffice it to say that I am way impressed with Yanay’s sale skills and am totally going to consult with him in respect to clothing swaps….

Here is Yanay, with his weapon of choice. I can safely say that, at least for today, Yanay is my absolute favorite Israeli in the whole, wide world. 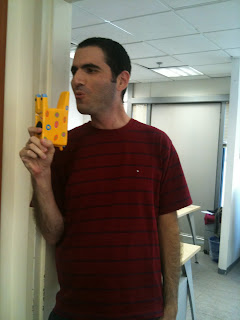 (And a thanks to my office mates who bought nearly all the cookies! NIS 170 is now safely ensconced in Alyn’s coffers!)

Feeling jealous? You two would like to buy some virtual cookies? Sponsor me here!
Posted by Gila at 11:17 PM

"Feeling jealous? You two would like to buy some virtual cookies?"
Since I'm sure you know that you have more than two readers, I assume that 1) you meant "too," 2) as bi-lingual olah, you are suffering from dreaded negative language transfer, which eventually leaves one unable to communicate correctly (and usually quickly) in either language, and 3) this is a perfect example of how spell-check can be totally useless.

No... she only has 2 readers. Please leave us now.


I'm not sure what type of weapon Yanay is holding, but I'm confident it is NOT a ceramic cow. I was raised around cattle and take my word for it, Gila. Cows don't look anything like that!!

Glad to see you're writing again. Let's see if you can manage 1 post a week as a goal. That is unless, of course, you get into a serious relationship with any Sonny Bono type...

Oops, I meant to add one thing:

Exceedingly fair, I should think.

I just re-read your post about "30 being a dangerous time". So, besides that whole unfortunate bomb-thing, what has happened since you made aliyah and since you wrote that piece in Jan. 2008? Re-read that post and tell me (us) what you see differently now. But keep writing!!